We’re currently living in a rental townhome with no yard, which is deeply saddening when you have a strong desire for a vegetable garden. Making the best of things, we set up some pots on the deck and filled them with our favorite herbs, tomatoes, and peppers. We’ve been doing this for a couple years and are still learning new things, like what size pots are right for each plant. 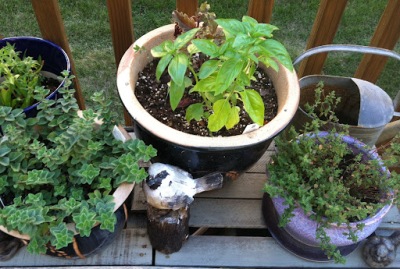 I’m not the greatest at starting from seed (what’s the opposite of a green thumb?) so I always make sure to buy healthy plants that have already started to mature. I’ve found things I’m good at (thyme, mint, peppers) and things I’m not so good at (cilantro, tomatoes, dill). I always have a few in between things that still need some work like basil (something keeps eating it) and parsley (it doesn’t seem to like extreme heat).

We constantly experiment with size and depth of planters because sometimes suggestions don’t always work. I planted patio tomatoes in a gigantic container and we’ve still only seen about two. Last year I bought them in a hanging basket and they thrived. We also had better luck with peppers when they were deeper, but smaller, containers.

Even with the hassle I’d say having your own garden is worth it. Of course it would be easier in a yard with access to a hose, but sometimes you just have to do the best with what you’ve got. In the end it’s so satisfying to just walk out onto your patio and pick your own ingredients. It’s the only sure-fire way to know how your food is grown, afterall.

My favorite thing to eat straight off the vine is tomatoes. The flavor is entirely different from something you’d buy at a grocery store or even a farmer’s market. I was told from a very good source that when vegetables are transported from farm to market, it’s difficult to not refrigerate them. Refrigerating alters the flavor and texture of tomatoes so you may have never had the pleasure of tasting what a tomato should really taste like. This also enables you to pick them when you want to. We tend to want them a little underripe but you may want them just ripe or even overripe.

There are plenty of fancy kitchen herb growing kits at home & garden stores with fancy stands and tiny pots. We bought one and it’s still in the box. I would suggest going to a garden nursery in spring and getting exactly what you want. I was amazed at the selection. Culantro? Apparently it’s a much stronger (and hardier) version of sister cilantro. The downside is that it’s also much sharper, akin to a weed. I also purchased some chocolate mint which is delicious, delightful to smell, easy to grow, and with it’s purple vine and deep green leaves isn’t so bad to look at either. You’d be amazed at the variety of mints from just your average mint to pineapple. Oh, the temptations!